It was grey and raining for my first river swim. The air was no longer cold, having jumped considerably after the ice of the last few weeks, but the persistent driving drizzle meant the banks were nearly empty. Apart from us. 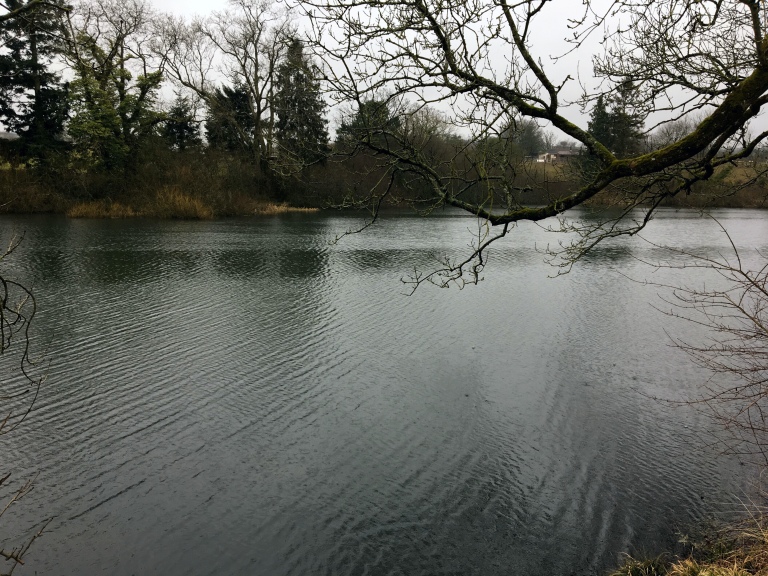 I had just joined the team of the Outdoor Swimming Society for a content planning meeting, and with some new season, brightly coloured hammam towels in tow, we made for the banks. The water had a quiet green glow, not bright like a gemstone but peaceful – the flickering had flame beneath the surface only displaying its colours when it chose to. No need to show off.

Thin brown branches, their journey up to the sun switching one way then the other so they squiggled in the sky, framed the flat expanse of slow moving water. At the other side, three birds took flight – too fast to see what they were. We slid down the muddy bank, resilient blades of green poking up between our neoprene coated toes. It was my first winter swim without a wetsuit – a triumph of mind over body.

Launching off, a collective gasping broke the air. Swimming as a group was also new to me, and sharing the shock was hysteria inducing. To find something you love and find other people who love it too, who understand, makes the experience even more heightened.

Cold but soon deep, you could push off and immerse yourself immediately. Having never swum in skins so early in the year, I had built the temperature up in my head to be instantly heart stopping, to be more than I could bear. But I could bear it. There I was, gasping, even spluttering a little, but still kicking, still living, still glad. As always with wild swimming, you learn to overcome, learn your body is capable of so much more than you thought.

The temperature was biting, nibbling at the fleshy parts and forcing a wedge of cold into my chest. We weren’t in long. A plunge in, a kick out to the centre, a spin to celebrate the sky, the water, the trees. Back to standing depth, to the centre one more time, marvelling at the cold and the way it awakens you to the world around you, then out, red and dripping, to change on the muddy bank.