Coming in the middle of a very long work week, I desperately need this swim. I decide to walk there as I have an hour to kill and it’s only 25 mins by foot. An hour and a half later I am still walking around the flyovers and tower blocks of the Docklands district and I very, very nearly give up. But then I see an arm extended in front crawl in the big blue dock. I’ve made it.

It’s very much a pop up swim, with tents to store your belongings in and a small trailer with black partitions as a changing room. You have to sign up in advance for a NOWCA swim band, then touch in and out. It records your distance and time. There’s a set course with two distance options – 400m or 750m – and you can, of course, do multiple loops for as long as the session lasts if you like. I really think pop up swimming is a positive move, opening up bodies of water that might previously have been prohibited. There’s even a no swimming sign next to the no fishing one, so without NOWCA’s initiative, this stretch of city based water would undoubtedly be inaccessible.

After changing, I make my way down the steep gangway and out along the fake-turf pontoon. There’s a ladder down but I elect to sit on the edge, letting my feet dangle in the welcome cool, before pushing off and in with a splash. The water is green and blurry beneath the surface, though from above it is deep metallic blue. The tiredness that has made me feel fuzzy toward the end of the week is instantly cleansed away. My cheekbones relax. My arms stretch, yawning and tightening, taughtening, loosening. It’s worth the hour and a half of bumbling around major roads and office blocks. I’m back to being a water creature. 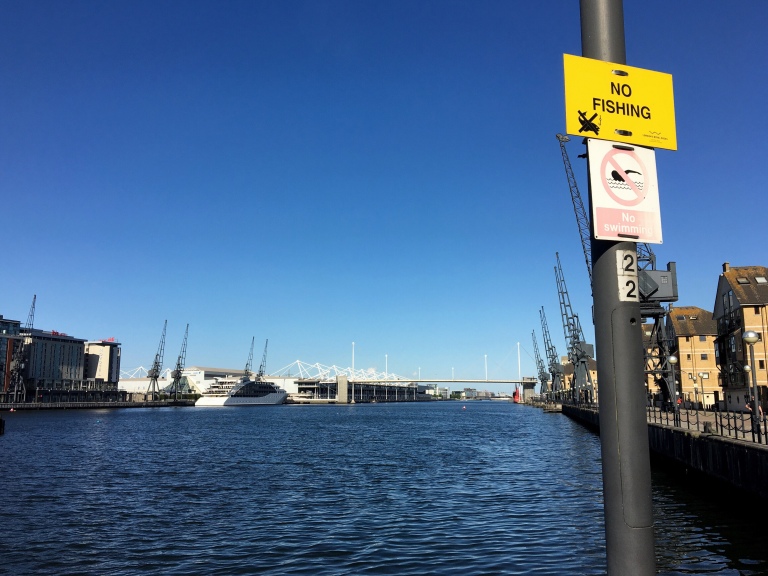 I swim out to the first marker buoy. To the right, there’s a water sports complex and the water is churned up into silver spray by people on boards whisked along by a wire. London City airport is close and the planes, like huge metal imprints, fly low over the water. I hear the steady rumble of flight and use my third stroke of front crawl to flip to my back. I float, looking up directly above me as the plane soars over, its belly to mine, so big, so small. It’s like watching a bird flap over and momentarily feeling how tiny, how static we are. But on a much grander scale. I keep swimming out to the next buoy, looking up and over at the townhouse apartments stacked along the edge, the teenagers gathered in a cluster, the couples strolling home for Friday night. To then I am just a red swimming hat. To me they are miles away.

The water’s surface is wavy, chop rising in peaks, and when I stop to look around it assaults my nose, my forehead, water slapping everywhere. I let my feet dangle, down to where it’s colder and it shivers deliciously. The buoys mark out a good distance, a space big enough to feel you’re alone. Ahead of me is a yellow hat, but off in the distance. Behind me is a blue. The stretch back to the pontoon is harder to sight, the sun glinting off the water and throwing back its light. Instead I follow the tiny foamy bubbles left by the hat in front of me.

I swim the circuit again, slower, stopping for every plane, taking time to look around and feel small.